So, you’re doing pretty well in your Japanese studies. You can now stride confidently into any Japanese restaurant and say 一つとんかつラーメンおねがいします。(Is it totally correct? Well, you won’t starve as a tourist, anyway, as long as you go into tourist-friendly restaurants.)

You even proudly know that you used a kanji in 一つ. Wow! Super! And teachers give you kanji that have two or three or four pronunciations, and you’re a bit worried, but hey! You’re a language expert from birth! You can do it! 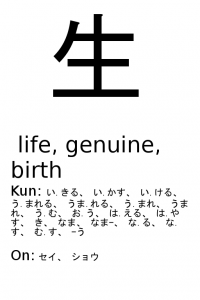 I mean, the first time I saw this, my eyelid started to twitch. If yours didn’t, then you’re made of sterner stuff.

Never mind which ones are commonly used and which ones are not, my human eye saw 17 different ways to say this thing (still not sure what the heck ‐う is supposed to mean), and my eyelid started twitching to try and cover the mind-bending sight.

Of course, we all know the reasons why this happened. Japan didn’t have a written language 1500 or so years ago, and China was a big rich country, so Japan took their writing system and adapted it to both the Chinese and Japanese languages at the time. And languages are living and change, and a couple of more waves of Chinese influence came over, and Japanese itself was changing over the same time, and so on, and so on.

So not only do you have to extract meaning from kanji, you have to know how it is pronounced in the word you are reading. It just gets better and better, right?

Are there ways around this? Hard study, and lots of it. On a regular basis.

“But Japanese For Optimists says…”

Hard study. And lots of it. On a regular basis.

Next I’ll talk about writing the kanji, and then after that, try and make a coherent summary for the student out of all these interesting facts. Good dog!